A Complete Guide to Texas Hold’em Poker Hands. If you’re not sure about poker hands yet, this is the page for you!

If you’re learning to play poker, you’ll need to understand poker hand rankings before you can do anything else.

The hand order is the same in all forms of poker. It doesn’t matter whether you’re playing Texas Hold’em poker, Omaha, Stud or any other form of the game, all poker hands use five cards. But which are the best poker hands and which are the worst? Keep reading for our handy guide to get you ready to join the Poker Club community!

If you find this guide helpful or want to chat to other poker players, join us over on Discord.

In Texas Hold’em, you’ll receive two hole cards, which are the hidden cards only used by you. Throughout the course of the game, five more cards will be dealt into the middle of the table, and they’re called community cards. These community cards can be used by everyone at the table. Once all cards have been dealt, you’ll need to make the best five-card poker hand from the seven available cards. You can use any combination from your hand and the board. Here are the complete poker hand rankings, starting with the best hands first, down to the weakest hands in order.

NB: In the following poker hand hierarchy examples, the first character represents the rank of the card, while the second represents the suit. For example, Ks means “King of Spades”.

The “Royal Flush” is famously the best possible hand in poker, so-called because it contains all of the “royal” cards, i.e. the five best cards, in the same suit. It is really just an Ace high straight flush, thus it sits at the top of the poker hand rankings.

The probability of making a Royal Flush in Texas Hold’em Poker is tiny, just 1 in 649,739, so don’t expect to see them very often!

Four of a kind

Just as the name suggests, this poker hand contains 4 cards of the exact same rank, with any other random fifth card completing the hand. A relatively strong hand among the poker rankings, the chances of making four of a kind in Texas Hold’em are just 1 in 595. This is an exceptionally strong hand but if two players have four of a kind, the four of a kind made up of the highest cards will win. If this still doesn’t lead to a winner, the kicker is used. Kickers are discussed further down this page.

The next hand is the first of the more commonly seen hands. A full house is a hand containing three cards of the same value, and two other identical cards of a different value. For example, A-A-A-K-K would be a full house. The three of a kind part plays first, so “aces full” would beat “kings full”, for example. The below example is referred to as “Aces full of fours”, since it’s three of a kind Aces, with a pair of fours. The odds against completing a full house in Texas Hold’em poker are around 37.5 to 1. If two or more players have a full house, the player with the highest three of a kind will win. If this doesn’t lead to a winner, the player with the highest pair wins.

A flush is a hand featuring five cards all of the same suit. These five cards won’t be consecutive ones – if they were, you’d have a royal flush or straight flush instead. It’s a reasonably strong hand, but be careful before shoving all your money into the middle of the table, as it can often be beaten. If more than one player has a flush, the winner will be the player with the highest card in their flush. The second highest, then third highest, and so on are then used to separate hands.

Sitting right in the middle of the poker hand hierarchy, a straight is a hand with any five cards in running order, but not of the same suit.

The chances of making a straight are a little under 21 to 1 against in a game like Texas Hold’em. The player with the highest card in their hand will be declared the winner if multiple players have straights.

Three of a kind

No prizes for guessing that this is a hand that contains three cards all of the same suit. The other two cards will be different from one another – if they aren’t, you’ve got a full house, which is a much better hand. In Texas Hold’em poker, you’ll make three of a kind roughly once every 20 hands. The player with the highest cards in their three is the winner if more than one player has this hand. In the event of two or more players having the same three of a kind, then kickers are used.

If you are holding two different pairs with a random, unmatched card in your hand, then you have “two pair”. The bigger of the two pairs plays first, with the lesser pair only acting to break a tie. So Kings and threes would beat Queens and tens, for example, while Jacks and nines would beat Jacks and sevens.

One of the more common poker hands, and towards the bottom of the hand rankings. A pair is simply two cards of the same rank, with no other matching cards. In Texas Hold’em poker, you will find a pair in your two starting hole cards once every 17 hands on average.

If your final five card hand doesn’t fit into any category in the above poker hand rankings, then you have the worst possible type of hand – high card. The best card in your hand plays, so the below example is “Ace high”. Ace high beats King high, and so on.

To really bring your A-game, it helps to have a grasp on kickers too. Kickers are essentially spare cards in your hand. For example, if you had A-A-K-K-10, you’d have two pair and your kicker would be the 10. You might not think that your kicker is important, but it can be the difference between winning or losing a pot. This is because the kicker will be used to determine the winner when two players have the same hand. For example, if both players have A-A-K-K in their hand, however, one has a 10 kicker and the other has an 8, the player with the 10 wins, as they have the higher kicker. If both kickers are also the same and the hand allows, the second kicker will then be used, then the third. If two players have exactly the same hands though, the pot will be split.

See you at the table! 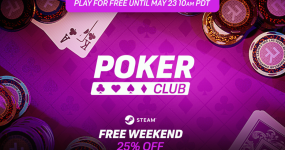 Join us in Poker Club for the first ever Steam Free Weekend! 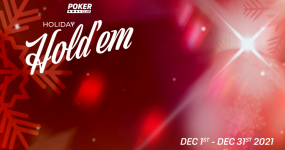 Enjoy the festive season in style, with the Holiday Hold'em tournament! 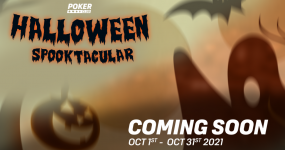 The next monthly tournament is almost here! Put on your bravest face and prepare for the Halloween Spooktacular! 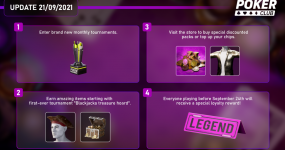 The Tournaments Update is here! Find out what's in the update and prepare to hit the table in Blackjack's treasure hoard. 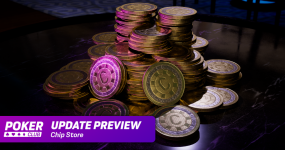 Read about the Chip Store, a brand new feature on its way as part of the Tournaments update, and find how you'll be able to collect a selection of free bundles as the store goes live! 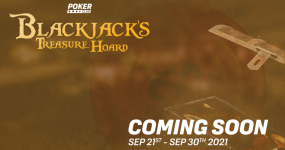 Get the lowdown on our first ever Monthly tournament. Check out the prizes that are up for grabs and join in the excitement for this nautical showdown. 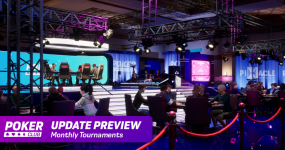 Find out more about the upcoming Tournaments Update for Poker Club, with an in-depth look at the flag-ship feature - highly competitive Monthly Tournaments. 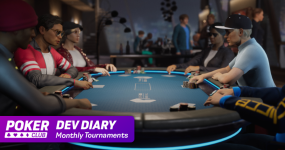 Our next update for Poker Club is in development, and we want to share an early look at one of our favourite features, brand new monthly tournaments!